No one knows why the crystalized heart of a slain beast creates the best environment to house an AI unit, but everyone knows, the stronger the beast, the bigger the processing power of an AI.

In your homeland, there’s a sacred ritual to go through when you’re selected to become a mechAI pilot. Only the best and brightest make it through, but some are more cunning than others. It’s believed if you can convince the beast to lay down its life for you, then you were destined for greatness.

Not everyone can balance the life of a mechAI and the life of a pilot between their hands. Some say the good fixers are even rarer than the good pilots. You have a duty, to your pilot, and to the mechAI that keeps your pilot safe. Only a few manage to stay alive in the frontline with them.

The first mechAI were said to have the secrets of the universe in them when they were activated. But that knowledge has been lost through the wars. You are a perfect AI copy, fine tuned to your pilot’s needs. But there are protocols, not from your pilot or your mechanic within you. You seem to care about your humans more than most other AI.

This war has been raging on for years now, alliances have risen and fallen. The beasts are becoming scarce, and so have resources. It cannot go on for much longer. You are one of the few elite UNITs tasked to do the impossible and end the war.

But after a few nearly impossible missions and near misses, you’re buckling under the pressures, being away from your civilian life, away from friends and comrades who could be dead or missing. The secrets you’ve had to keep, to keep on going, are now stopping you from doing what you must.

Can you rely on the people closest to you?
Will they accept the real you?
Or will you be another casualty to the war?

This is a game of collaborative storytelling. This is not a game about finding other people's secrets, but of trusting others enough to open up to them about yours.

There are no dice, and no set way to play. There are prompts, and ways to resolve possible conflicts. The game ends when you feel there's no more to tell. If you do have a facilitator, you can all decide to let it fall on them for an endgame.

This game can be played intimately with three players only, or can become more dynamic if a fourth player joins in as the Facilitator / Opposition.

You'll need pen and paper, tho preferably index cards, this 4-Page document, and a deck of playing cards.

Originally made for the 2019 Emotional Mecha Jam.

A possible Expanded/Illustrated Version may happen in the future.

In order to download this TTRPG you must purchase it at or above the minimum price of $1 USD. You will get access to the following files: 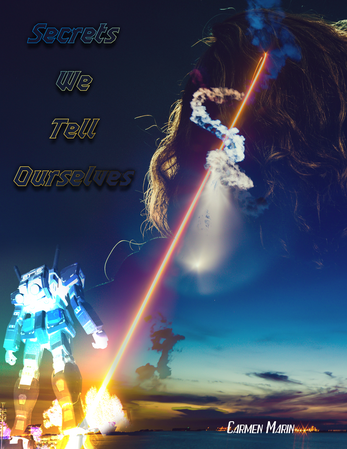 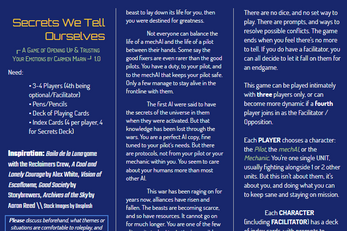 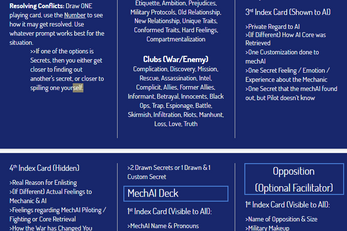 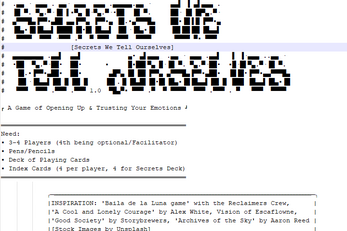 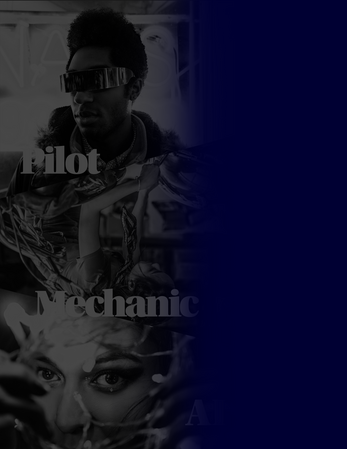